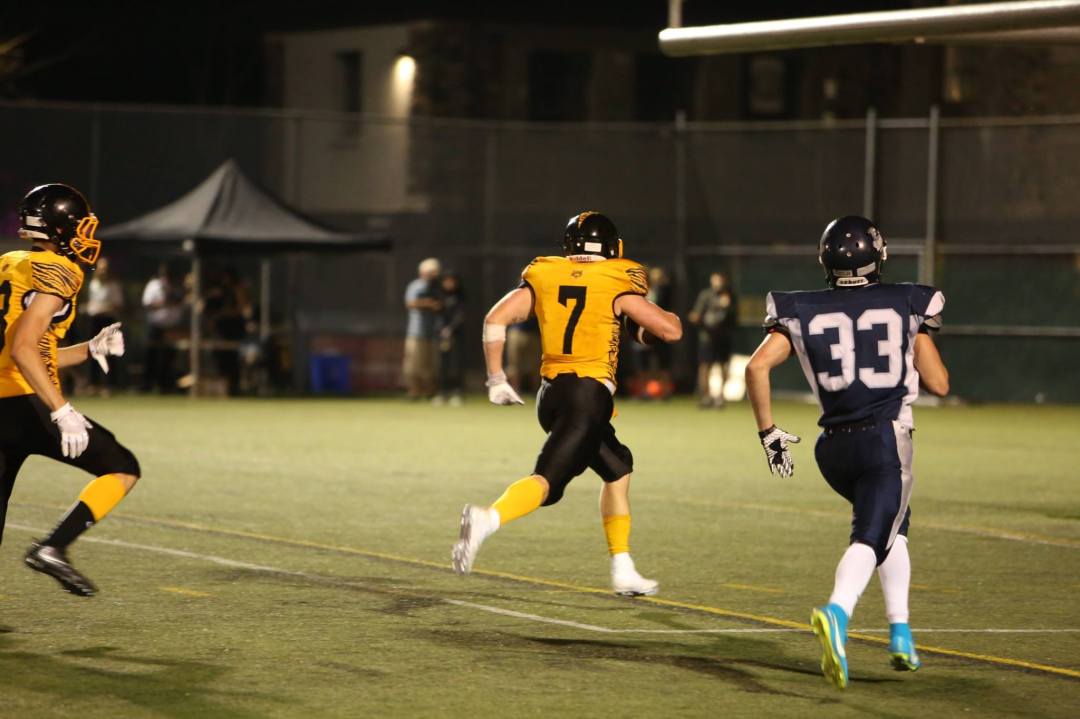 A win is a win, is a win.  In his post game speech, that is not the way Dal head coach Haggett felt about the Tigers’ victory.  Coach said, “the effort is not there, we need to demand more”.  But the Tigers evened their season record to 2 and 2 with a 35-0 win over the UNBSJ Seawolves.

Dalhousie’s workhouse, running back Zack Leger, scored their first TD on a 10 yard run which was set up by Saint John native Gordon Brown’s first play pick.  The PAT was blocked.  The Seawolves defence played tough for the entire game.  Twice they stopped Dal marches inside the five.  A consequence of the first one saw the blue and white give up a safety to put the Cats up 8-0 with 2:17 remaining in the half.  But the flood gates would open as “smash and dash” Leger got lucky on an Argo bounce (temporary fumble) for a 75 yard major.  Turner Kinal’s convert attempt was good and the black and gold led 15-0.

Last year’s AFL offensive MVP Leger broke another run 72 yards before the half ended.  A Chris Duplisea pass to Alistair Chauhan for the two point convert saw the Tigers head to the locker room with a 23-0 lead.

Dalhousie’s defence rebounded in this game from two previous poor outings.  The Tigers D forced another UNBSJ safety.  The Seawolves QB should be commended for his toughness, repeatedly getting up after being sacked.  Liam Manson starred on D with 3 sacks and 5 tackles while Eric Purcell downed the QB twice.  Majd Ibrahim and Tommy Panther had a sack and 3 tackles.

Duplisea returned to his first game form completing 11/18 for 162 yards with 1 TD and 1 INT.  Jack Underhill had two catches for 55 yards, one a 50 yard catch and run for six and a two point convert.  Spencer Muise led Dal receivers with 5 catches for 55 while Chauhan had 4 for 46 and had everyone cheering his sideline double deke.  The O line deserved credit for keeping their QB safe and providing the run blocking which amassed an incredible 319 yards rushing.  And the Tigers showed even more depth in the backfield with Jason Watts collecting 66 yards on ten carries and just missing a fourth quarter major.  The D again forced another safety touch completing the shutout.

Here’s a shout out to little but mighty and definitely energetic water boy Freddie Francis, the Defensive co-ordinator’s son, who kept the squad hydrated with his numerous sideline to mid field return runs.

The Dalhousie Tigers’ Homecoming clash with the UNBF Red Bombers should prove more than exciting!  The Bombers hold a 17 point lead in the two game total point for series for the Alumni Cup.  Coach Haggett and the team believe they can overcome the deficit and win the Cup for the third consecutive time with the home field advantage and a full warmup.

The Black and Gold need to focus on fewer penalties, a better pass defence, a short passing game and to play with intensity from the opening whistle.

A win on Sunday at one pm at Wickwire could be the start of the Tigers hosting a home playoff game and just maybe the turn around needed to repeat last year’s championship run.

Come and be part of the event, Dalhousie Homecoming.  Join the cheerleaders, be a cheerleader and join the FAN FUN at Wickwire Field.