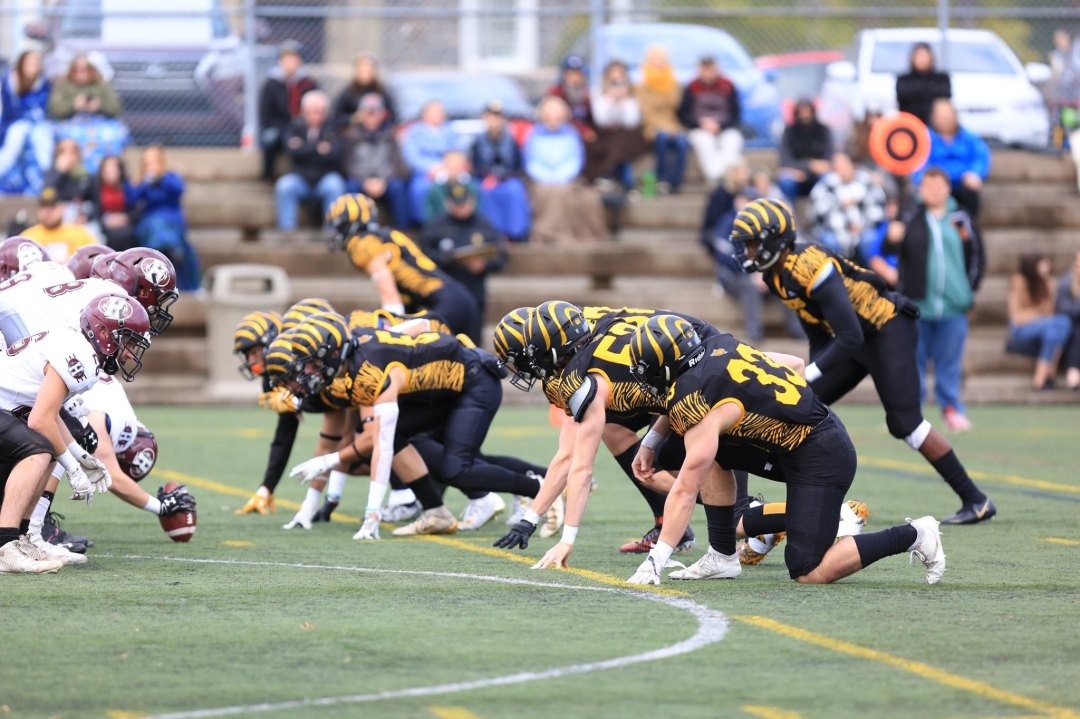 After this column, I was hoping to have one more to write as the Dalhousie Football Tigers complete their tenth anniversary in the Atlantic Football League.  But Holland College which also joined the AFL like Dal, a year after the league’s inception would battle the Tigers for a spot in this year’s title contest.  And it was a battle!  The game was sometimes chippy especially in the first half, but was an excellent show of football skills.  In the dying seconds of the tilt, the defending champion Tigers were unsuccessful on three Hail Mary’s and lost their dreams of repeating as champions in the 23-17 loss to the Hurricanes.

At game time, Wickwire Field was overcast and wet and a defensive struggle became ongoing through the first twenty-seven minutes.  Then the nicest looking long bomb of the day saw Hurricanes QB, Teshaun Tran connect with Daniel Seymour.  This helped set up RB Marco Antonio Briones Guiterrez one yard TD plunge.  Matthew-Uriah Kaye Mitchell made the convert and the half ended 7-0 for Holland.

The Dalhousie defence was staunch earlier, stopping the Hurricanes’ O after Tiger fumbles in their own end of the field gave the white and maroon great opportunities to score.  Coach Kelly’s D had come to play. Final game stats showed Sam Jennings led all tacklers with ten while Nate Whidden, Jesse Legault and Eric Purcell had 7 tackles and one sack.  Liam Chisari also had seven.

The Tigers evened up the score five minutes into the third Q as Chris Duplisea connected with Jack Underhill (4/81) for a seven-yard TD pass.

Matt Lindsay was the second leading receiver on that day with four catches for 35 yards.  A wizardly 48 yard open field run by Duplisea set up the first six.  The Dal QB did not have one of his best days passing (14/32-150 yards-1TD-2INT).  But he sure did run.  Another long run of 22 yards by the QB ended up giving him a one yard TD seconds later.  The black and gold pivot with help from his friends, the O line, finished the game with a remarkable 122 yards on 15 carries which would make any RB envious.  By the end of the third Q, Dal was up 14-7.

Kaye Mitchell, a standout receiver on the day, kicked a field goal just two minutes into the fourth, to put the Hurricanes within 4, 14-10.  Julian Jenkins’ 32 yard FG minutes later put the Tigers up, 17-10. Jenkins also made Dal’s 2   PATs on the day.  A monster catch by Mitchell gave HC the ball close to the Tigers’ 5 and Guiterrez scored his second major on a four yard run.  At the 6:24 mark of the fourth Q, the score was knotted at 17.  Then things got crazy exciting, especially for the last few minutes of the game.

Dalhousie’s ineffective O in the fourth led to a third Guiterrez TD on an eight-yard run but a fumbled snap led to a missed convert and the Tigers were down less than a converted touchdown.  The Tigers were again three and out.  Dal stops HC and with less than a minute remaining, fans were chanting “block that kick”.  Jude Mahou does just that. Dal fans and players are off the wall!  The Hail Mary’s begin but to no avail.  Everyone thought the game was over, even the announcer, but there was a flag on the field for pass interference.  Last chance and even closer to the goal line but again the ball was knocked down and this time the game and the season was over for the Tigers!

For the only two true Dal senior graduates, Jesse Legault and Connor Paquette, who had made significant contributions to Dal’s 2016 and 2018 championship teams, will carry fond memories of their years with the Tigers.  Head coach Haggett will have some consolation in knowing that over 50 players have gained a year of experience and will hopefully return for the 2020 season and a potential AFL championship?

THANKS TO THE VILLAGE!

As they say, “it takes a village to raise a child”.  Well, it takes a team to raise these fine young footballers who will be our future leaders.  I am extremely grateful to Jim Wilson who asked this old Tiger to come along over ten years ago to get football back at Dalhousie University.  Thanks to the first three Tiger head coaches, Mike Tanner, Stu MacLean and Alan Wetmore for their foundation building.  And thanks to the approximate 500 student-athletes who have benefited from being members of the greatest team sport over the last decade.  Thanks to the Founder’s Club for providing financial help to get us on the field.

Coaches, of course, are invaluable!  Offensive coordinator, Evan Brown, the energizer bunny doubled as a cheerleader during the Hurricane clash.  He must have done 500 jumping jacks during the game to ignite sideline enthusiasm.  His assistant coaches, Nick Hunsley, Louis Gauvin, Chad Kirkus and Casey Jones, all former Tiger players are giving back along with Niko Williams and Luis Perez who round out the staff. David Kelly, DC, not quite as animated as Brown, has done a masterful job with his young chargers, stymieing opponents.  Kenzie McNeil, a former Tiger, Pat Mpuanga and Shawn McIntyre round out the D brain trust. Thanks!

Earliest to practices and games and the last to leave are Scott Martin and Scott Burke, the valued equipment managers.  And Mark Kays for all the remarkable game day photographs.  Lisa Wilson, head physiotherapist leads a versatile and knowledgeable group of assistants.  Yet there are still others behind the scenes that assist on game day.  All are deserving of thanks and hopefully, this years’ fifty-eight players have delivered more than a handful of thanks to those who have been mentioned.

But here’s to the big three.  Casey Jones, a first-year medical student, is finishing his third year as football club president and assistant coach. Where does he find the time?  Head Coach Haggett who like his coordinators and assistant coaches, does not receive a dollar for his hundreds of hours of service, in and out of season.  His passion for the sport and its’ benefits to young men keep his huge heart running all out.  And what can you say about Jim “Kraft” Wilson?  He wanted to bring “Fun and Football” back to Dalhousie University.  Goal achieved and a few titles along the way.  THANKS TO EVERYONE!!! Pass the cudos on to these remarkable individuals who make up the Dal team.

HAPPY TENTH ANNIVERSARY DALHOUSIE FOOTBALL and here’s to the next decade.

Dal football would be remiss if it did not thank present AFL Commissioner Larry Wisniewski, his predecessors and Barry Ogden who had the vision of an Atlantic Football League.