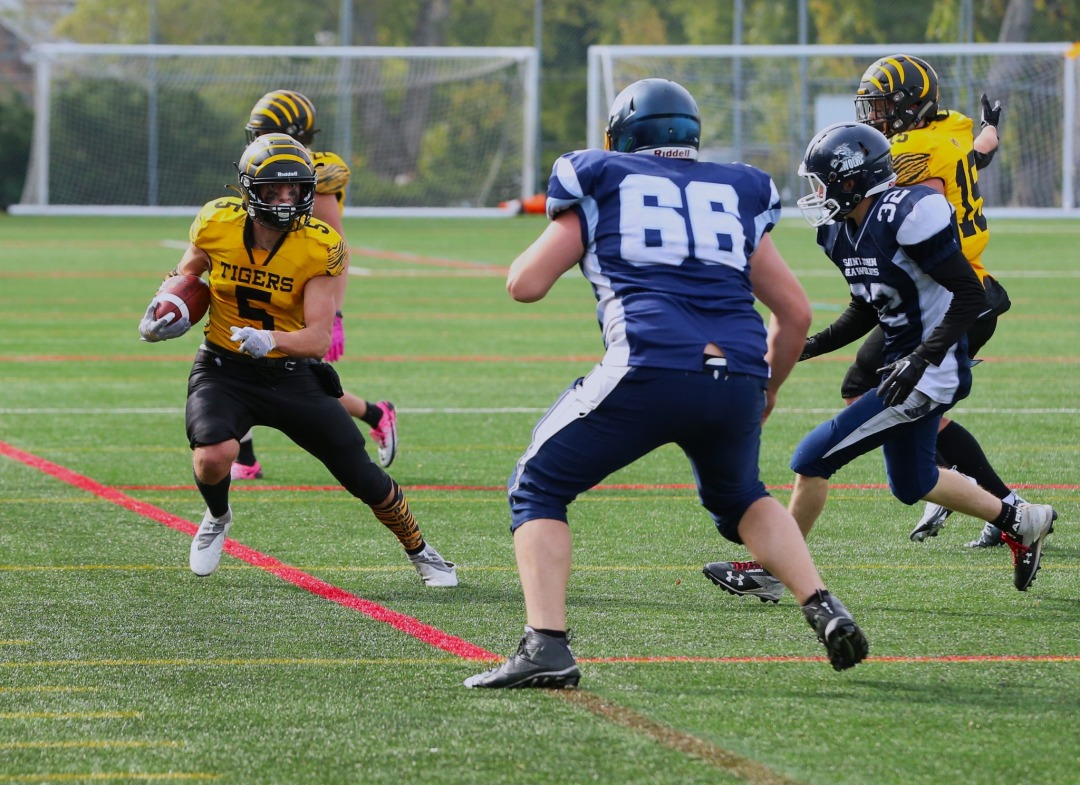 As you read the Dal football score, you might think the game was nearly perfect for Dal. But I am sure that Coach Kelly will have things for his Tigers to work on during the coming week! One thing being unnecessary penalties!

I had the good fortune to play for a CFL hall of famer, Bernie Custis. As I remember, his important word to his players was “poise.” In over 40 years plus of coaching, the word “poise” became important to me. But in Dal’s victory the Tigers lost their poise numerous times on the field, especially in penalty situations. Against a real competitive team, a penalty could lead to a first down which could mean the difference between a win or loss. Tigers stay cool and keep your poise!

Now to the victory which has Dal in 1st place in the AFL. Offensive standouts included: QB Noah Glover-12/18 for 191 yards, 4 TD’s and one pick. Mitchell Pagé lead the Tiger rushers with 99 yards on 12 carries while Colton Allen had 4 catches for 45 yards and 3 TDS. Okyay Kepenek was perfect on all 7 converts and his booming kickoffs put the Seawolves in constant bad field position.

Dalhousie’s scoring started with a UNBSJ safety touch. The Saint John team gave up 3 in the first half as a result of the Tiger’s staunch defense, led by Liam Chisari with 3 sacks. The Black and Gold’s first TD came on a 12-yard scoring strike from Glover to Allen. The second score was from Grayson Domingues to Luke Smith off of a fake field goal. The Tiger’s third major, the 2nd TD by Allen came from Glover on a 31-yard play.

Dal’s D led by the tackling of Mike Mackenzie, Liam Howe, Max Parker, and a pick by Trenton Couture kept the Seawolves in their own end for most of the game.

Glover completed the first half with a 65-yard pass and run to Anders Hoffmann, and a 12-yard strike to Page, who showed some fine broken field running throughout the game. The clock ran continuously in the 2nd half as the Tigers were up 41 nothing at halftime.

Domingues started the 2nd half and threw 3 yards to Allen for his third receiving TD. A surprising 34-yard run by Domingues set up his 1-yard plunge for the B and G’s last major. Simon Ngoyi’s pick of a Luke Decotiis pass gave the UNBSJ’s squad only TD with just a minute left in the game. Al Ali converted, making the final 55 to 7.

The Tigers would love to see another large crowd as they host the Holland College Hurricanes Saturday at 1 pm. Wear your black and gold colours and be Tiger proud!