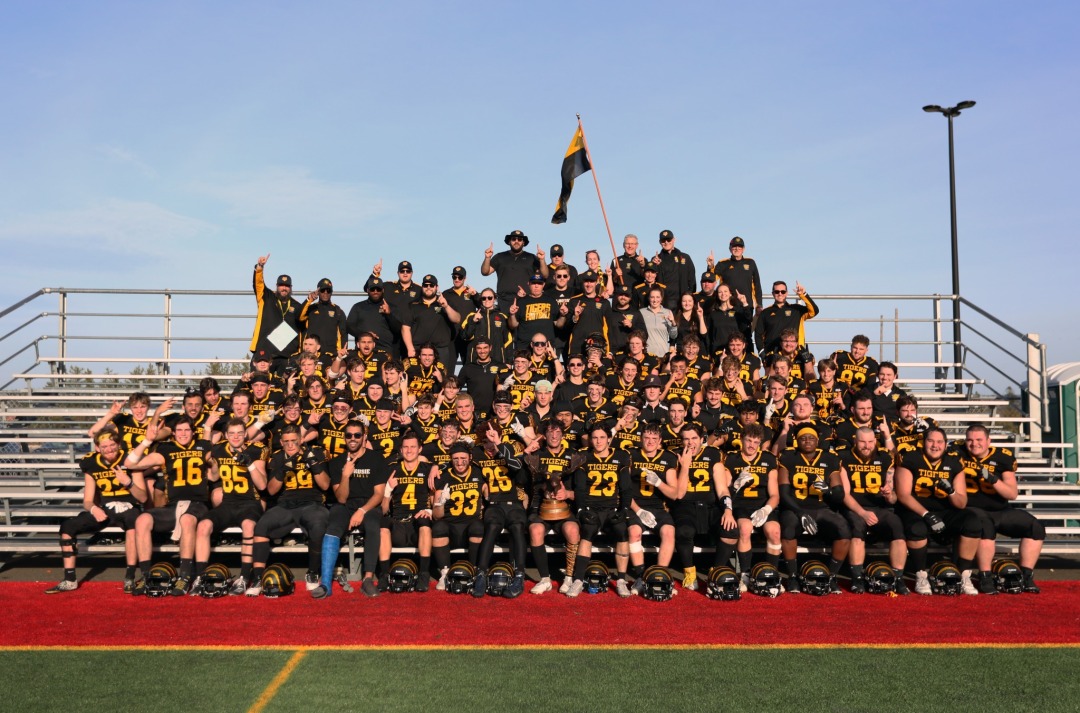 Way back in the 1960s, a US television network introduced sports fans to ABC’s Wide World of Sports.  This show chronicled the wild, weird, and sometimes tragic happenings in the world of sports.  That program coined the expression. “The thrill of victory/the agony of defeat.”  The Dalhousie University football family will never forget Saturday, Nov. 5th, on UNBF’s sparkling new field.  The underdog Tigers (defending champs) were minutes away from experiencing the agony when they turned things around and jumped in jubilation with the thrill of victory.

The Tigers left Halifax at 6:30 am for the Atlantic Football League Championship versus the UNBF Red Bombers.  The Tigers, in their lucky all-black uniforms, had a lackluster first half.  They climbed the stairs heading to the locker room with their heads down and looking somewhat despondent about being down 22-6.  A few of us lined those stairs offering encouragement, telling the Tigers, “heads up”, “the second half is yours.”  Most prominent was Dal’s Mr. Kraft, Jim Wilson, who was, as usual, the fountain of optimism!  Throughout the stadium during the first half, his cupped hand cheers of positivity rained.  His shouts became even more tumultuous as the Black and Gold scored at 8:13 to make the numbers show Dal 13, Reds 25.  Tiger QB, Noah Glover, rose to start to take a victory from the jaws of defeat as he connected with Aidan Keefe on a 30-yard pass and run major.

Keefe finished the game with 10 receptions for 136 yards while Glover was 26/40 for 257 yards and two short-running TDs.  Four minutes later, Glover hit Fergus Dogterom for six points.  With only seconds remaining and strategic completions to Colton Allen and Keefe, Glover crossed the goal line to tie the score.  Reserve placekicker, Matthew Irvine, who missed his first convert of the game, came through in the clutch to give the Tigers the AFL title 27-26 in a game that had two different halves and with an ending that defied description.

The first half was dominated by the Reds O line and the physical and elusive running of QB Hunter Sturgeon.  Dal’s rushing by Javier Reyes Landry (12/54) and Mitchell Pagé (11/52) gave the Tigers some ball control, first downs and allowed the Tigers to have more time and the Reds less time.  Sturgeon scored all three UNBF touchdowns in the first half and should be the league’s MVP.  Ryan Lee kicked three PATs, a FG and received a point on a missed FG late in the 4th Q.

Asked about his halftime speech after the game, first-year head coach and veteran DC with Dal asked them to play their game and reminded them that the game wasn’t over. It was a week late but for the first time this season the Bengals cut their usual number of penalties to five while the Reds had eight.

After allowing three majors in the first half, the Tigers shut out the Reds in the third Q and gave up just four points in the 4th Q.  D captain Liam Chisari, coming off a recent shoulder dislocation, didn’t play as much as he would have liked to.  But this leader should be given the “heart award”.  He finished the game with five tackles, all in the second half and he, like me, thought his shoulder might pop out as he dove to block a kick and just missed blocking it.  Other standouts on D include Jeremy Miller with 12 tackles, Trenton Couture – six tackles and two fumble recoveries, Max Parker – eight bone jarring hits, Ben Melanson – six, and Yassine Yassine and Mike MacKenzie with four apiece.

Coach Kelly commended the entire team effort in the second half and the resilience to come back and play to the final whistle.  It is incredible to think of all the lifetime hours he has committed to football from minor, high school, provincial and now Dalhousie. Like Wilson, Kelly believes that football develops leadership and numerous life skills.  Over 75 players have experienced personal growth since practices began in late August.  Now they have experienced one of their ultimate team goals, a championship and the thrill of victory!  All of us have experienced the agony of defeat at some point in our life.  But not everyone has experienced the jubilation these young men have in winning a major title like these guys have had in winning the AFL title.

These footballers have made their own history and Dalhousie history.

And in the process, they have developed friendships for life. On the tenth anniversary of this championship, they will gather to relive a most important period in their lives and share the footage of jubilation with their former teammates.

Thanks to the nearly one hundred individuals on this program page for their commitment to the Dalhousie University Tigers’ success in 2022.  Whether you are a player but more importantly, an equipment man, physio/trainer, coach, photographer, etc., thanks for your dedication!  Players especially, don’t forget the thank yous to those who have made this so special for you.

Personally, as a player/coach/administrator I have experienced the thrill and agony and have been rewarded with inductions into the FNS and Sport NS Halls of Fame as a builder.  But my biggest thrills have come in seeing the smiles on faces after they made the block, tackle, touchdown, etc.

My heartfelt thanks to Jim Wilson for asking me to help found this New Era Dalhousie Football team over twelve years ago!  I love to give back and hopefully, a lot of you will give back to your community in some way or another!

This has been another Year of the Tiger!  Let’s make 2023 another one!

Here is a link to a recording of the Championship game in case you missed it: