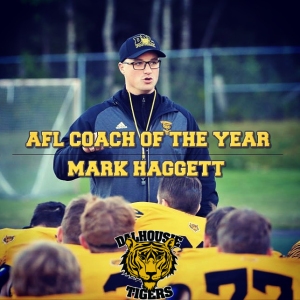 With over 22 years of football experience in Nova Scotia, Coach Haggett carries a wealth of experience to the table as the Tigers head coach. Coach Haggett has a record of 24 wins and 8 losses during his tenure; a 75% career win rate. Coach has led the Tigers to undefeated championship seasons in 2016 and 2018, winning AFL coach of the year both times. The Tigers won their first championship since 1959 in 2016 with a 306-33 point differential on the season. Mark’s Football experience ranges in the province from Pee-wee through to his U-Sports career with the St. Francis Xavier X-Men. As a member of X-Men Football, Mark played defensive line and began his love of coaching following his final season. He coached the defensive line at Sir John A Macdonald high school in 2011, culminating in a Div 1 Provincial Championship in 2013. He began with the Tigers program in 2014 as Defensive Line coach and Director of Recruiting.