Earlier in the week coaches, players and executives were concerned that Hurricane Matthew could be an equalizer in Saturday’s home game. But on a coolish evening perfect for football, it was the eye of the Tiger that came ashore at Wickwire field.

The black and gold of Dalhousie avenged last year’s AFL championship loss to the Hurricanes with a tsunami, a 49-8 wave over the Holland College Hurricanes. It was the perfect storm and gave rookie head coach, Haggett’s team, a 4-0 season and a possibility of hosting the league final in Halifax for the first time in their seven year existence.

The Majury coached D started the game with a hiccup, a first Q major to HC but pitched a shutout the rest of the way. OC Brown’s offence showed even more creativity than in past put it was the special teams that washed over the island footballers. 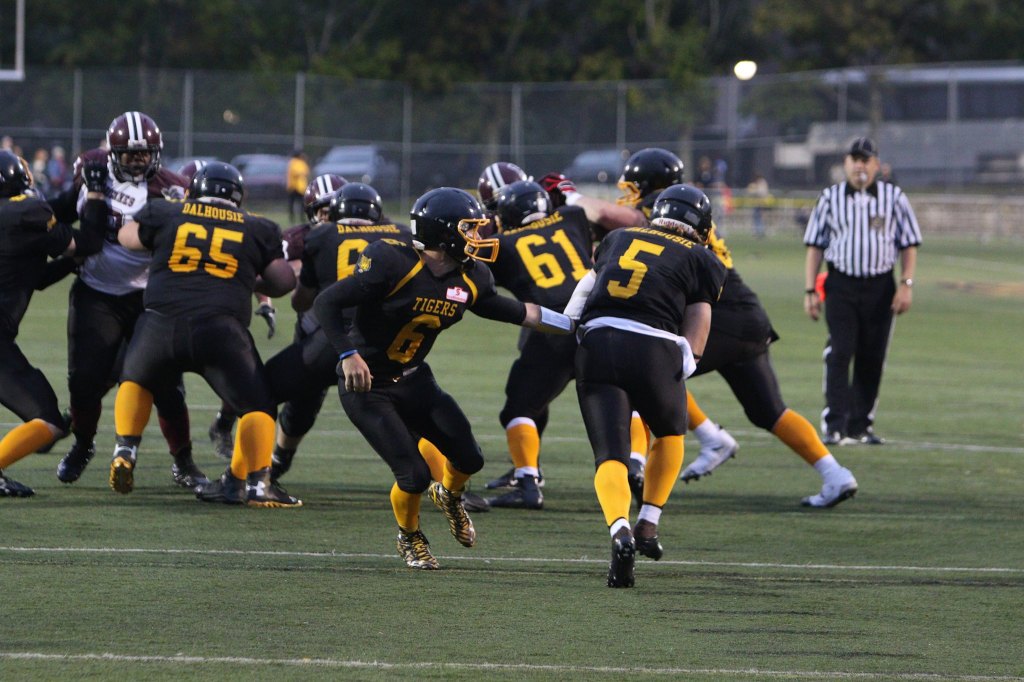 The only negative for the Tigers on the night were the multiple Unnecessary Roughness penalties, especially in the first Q. The game total saw 12 flags for 160 yards. Let’s return to the very respectable 5 that were called against us in the first game at Saint John.

The play on Wickwrire at the end of the first half and the last minute of the game were frenzied and left the Dalhousie fans ecstatic! This will result in even more black and gold supporters looking for another home victory this Saturday at 7:00pm. (one hour later than usual).

Placekicker and punter, Samure, was near perfect with 6 PATS, 2 FGs and a single off of a booming kickoff while Brown had a td on a fumble recovery. Chaisson, Liam Manson and McKenney led the D hit parade with 6 tackles each.

Here’s hoping the coaching staff continues to keep the Tigers hungry and humble as they continue to make history in the AFL. The eye of our Dalhousie Tigers needs to roll for four more games and then we can say it was the Year of the Tiger!